It is still not warm enough here, at the foot of the Adirondacks, to wear less than a sweater outside. But the sun is convincingly trying to thaw the cold soil and crocuses can be seen lurking prettily at the edges of buildings and lawns.

As my semester speeds by, I am working on compiling my senior project, which has mostly involved learning to use GarageBand and how to properly cite pamphlets.  As you may imagine, I have also become proficient at procrastinating, for which I have had the support of a couple good friends.  My friends have recommended distractions from watching hilarious TV shows about unfortunate American family drama to cooking interesting combinations of cheap and ecologically responsible foods.  Last night, while searching for a diversion, I came across this video, on an Earlhamite's blog, which I could watch repeatedly without getting bored:

It must be true, I saw it in a movie!

Recently, I have been collecting birthing scenes from the media of the past three or four decades. This is mostly in an effort to put together a really interesting senior project, but also just because they are everywhere and fascinating. What we show and tell each other about birth probably contributes hugely to our perceptions and feelings around our own birth experiences. If you grew up knowing the birthing process only by the ten second clips on your favorite TV show with the woman in stirrups screaming while everyone around her forcefully tells her to push, I can't imagine that your expectations of your birth could be anything less than terrifying. Why do we portray birth the ways that we do? I think a lot of it has to do with fear of nature, the loss of humanly control, and probably a lot of ignorance.

For example, this past weekend, my friend Chloe showed me a clip from one of her favorite shows in which a pregnant woman goes into labor while stuck in a car that had just been in a bad accident. The labor begins with her water breaking, followed immediately by her quick and incapacitating contractions, and ten minutes later in the ambulance, an EMT shines a flashlight at her crotch, declares her 10cm dilated, and a clean very large baby is born shortly thereafter. If I were to know little to nothing about birth, after watching that I may be under the impression that usually women go from no labor to pushing in a matter of minutes, that when in labor, a woman cannot move, that to know that a woman is 10cm dilated, you need not actually check the cervix, and that babies are born pink and shiny at the age of four to six months. "Well," my friend Brodie asked, "have you ever seen an accurate depiction of birth in a movie or TV show?" Mulling it over, none of us could. If you have seen one recently (specifically in a mainstream media production) please let me know.
Have you seen Lady Gaga's new music video?
Have you seen the movie Juno or Knocked Up? What other recent films/shows have you seen with birthing scenes? What did you notice? What did they emphasize? If you start thinking about it, you'll start seeing birthing scenes everywhere.

My favorite find so far has been in 101 Dalmatians, the original animated version. Toward the beginning of the movie, there is a rather long scene of Bongo, the father Dalmatian, and his pet (the human), pacing around outside a closed door, on the other side of which the mother Dalmatian is giving birth. The nanny/nurse is running in and out and giving brief incomplete updates to the excited/nauseated/nervous men, and a clock is ticking loudly in the background. This movie was made in the sixties, and depicts pretty clearly what the accepted role of the father was in a birth - outside. This birth scene, in a classic American children's movie, was the catalyst to my search. I continue to enjoy collecting scenes, but this remains my favorite. 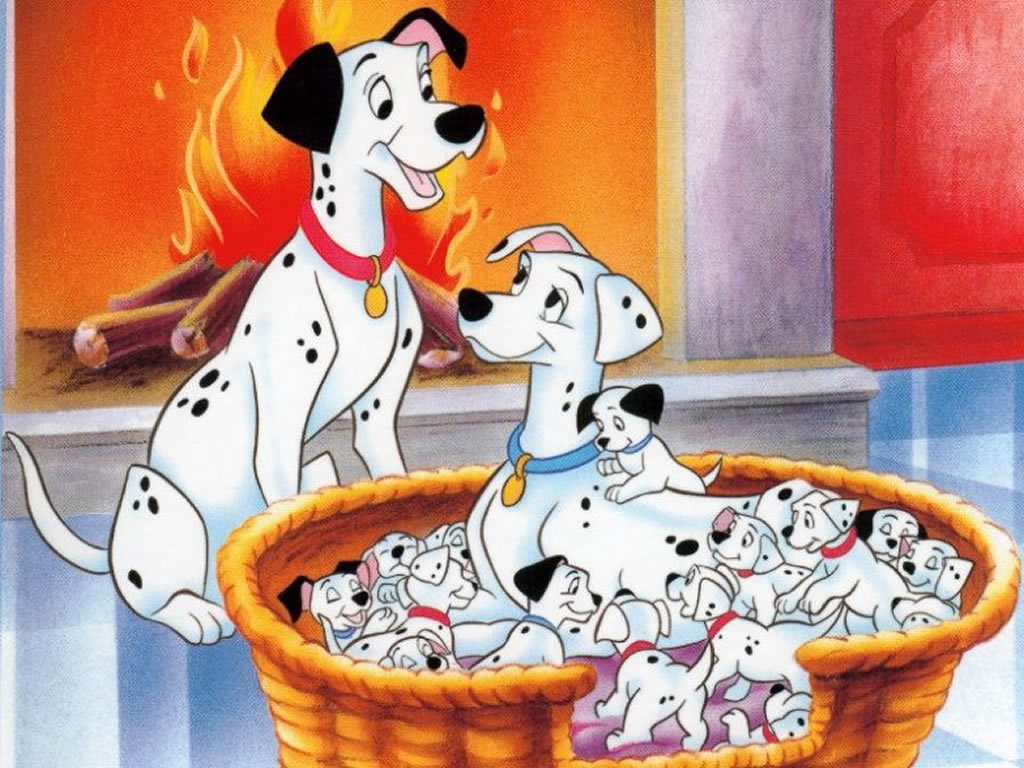 Last night, I was thinking about books that I love to read. In particular, ones that I can read over and over and enjoy every time.

It became apparent to me, that besides books of poetry (like those of Hafiz or e.e. cummings), or books having to do with midwifery (like Spiritual Midwifery by Ina May Gaskin or A Book for Midwives by Susan Klein), books that I like to read cover-to-cover multiple times are illustrated.

I think this train of thought is largely due to my day spent reading the same three children's books over and over again to a bunch of 1-4 year olds at the Waldorf day care I sometimes work for in Saratoga.

So, in case you are the type who likes to collect great children's books, here is a short list of some of my favorites:

1. Animalia, by Graeme Base
2. Big Mama Makes the World, by Phyllis Root and illustrated by Helen Oxenbury
3. Tuesday, by David Wiesner
4. Pigs, by Robert Munsch and Michael Martchenko
5. The Napping House, by Audrey Wood and illustrated by Don Wood

You Should See the Icicles

In a few days, I am moving out of a rather old big farmhouse and into a rather old tiny apartment about four hours away. There are many things that I anticipate missing about living here, most importantly the program that brought me here, which showed me how to be friends with eleven and sixty-five year olds, and my brilliant housemates. (youngfriendsinresidence.blogspot.com) 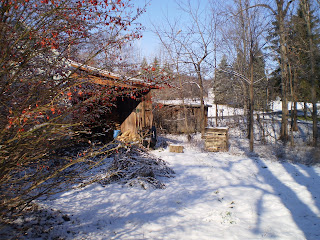 Other things include the incredibly wild diversity of wallpaper (I have both thousands of pink strawberries and multi-colored trains just on one half of my room), the creek and backyard, being in close proximity to the town of Ithaca, NY, as well as all the beautiful gorges and our impressive collection of collage supplies. 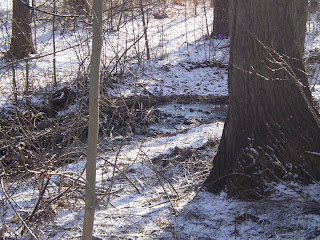 Posted by Natalie at 6:33 AM No comments:

Sorry for the long absence!

In order to continue to share with you all some of the nifty and wonderful things passing through my life, I will attempt to begin a practice of updating regularly with short posts concerning small things of interest.


I discovered this site, and many other fabulous things through my friend and lovely housemate Helen's blog, Things I like. 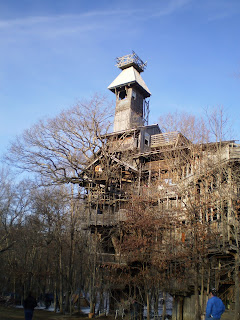 p.s. My family went on a road trip down to North Carolina and back, and on the way, we stopped at this pretty amazing seven-story treehouse.

My housemates, Franklin and Anna, joined me on a trip down to Richmond, IN, this past week. I had been invited to come give a workshop on Permaculture (and more specifically, worm bins, or small-scale composting with worms) at Miller Farm, a college house located about eight minutes off campus on a little farm. 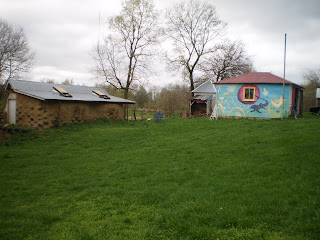 The workshop went well, and it was really lovely to get a chance to see some of my old friends for a while and explore their exciting spaces. A couple of highlights were the hidden treehouse in the woods and the greenhouse built out of tires filled with rammed earth and covered in cob. 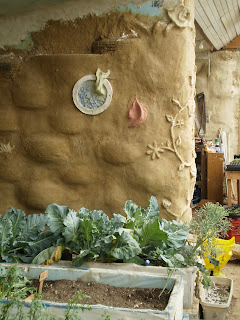 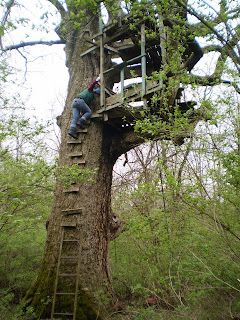 It was also really great to find, while going through the house's old scrapbooks, some pictures of my aunt Andi, my dad's first cousin Louis, and my current boss Chris DeRoller working on various farm projects. It turns out they were some of the first farm residents. 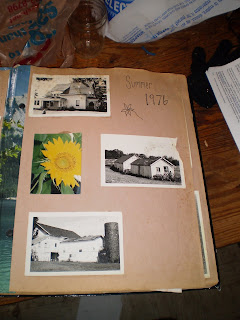 Posted by Natalie at 7:31 PM No comments:

The Young Friends and Residence Program is up and running! We are busy with a wide and wonderful variety of activities and adventures! 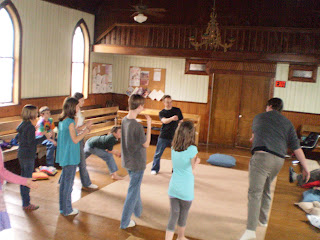 Facilitating Youth Retreats at Perry City Meetinghouse has been one of my bigger projects these past couple of months. The attenders have been kids from the Farmington-Scipio region of New York Yearly Meeting, most of whom are between the ages of 11 and 14. 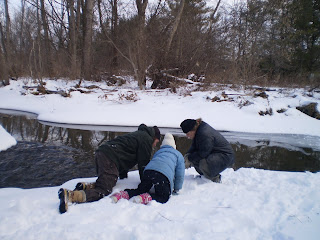 Along with youth program retreats, we have also hosted a couple Circle of Young Friend retreats (for folks between the ages of 18 and 35) at the Beloved Community House in Newfield, NY. Young Adult Friends have also come out to be Adult Presences at our youth retreats, which is a whole lot of fun for everyone involved. 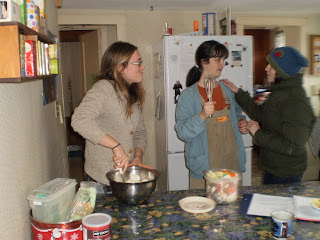 Posted by Natalie at 7:02 PM No comments: